Every Friday all the Kindergarten classes at our school gather together for sing-along. The kids love it, but it very often leads me to wake up on Saturday morning with a bad case of LSS (Last Song Syndrome)! It just so happens that we also had our most recent Character Education assembly on our school value of “Respect”. Our song for this value is none other than “Check it Out! (It’s about Respect)” by John Jacobson. You can listen to it if you want and you’ll understand why I woke up with LSS this morning and ultimately ended up using it as the title of this blog post!

What’s my Responsibility as an Educator?

If there’s anything that’s stood out to me by being on COETAIL, it would have to be the emphasis on sharing. As educators in the 21st century, we’re encouraged to not only be innovative but to share our ideas and learn from each other. The openness and ease by which we are able to do so in this day and age is wonderful, but at the same time there is a level of respect that is necessary. So far, I’ve become more aware of how to properly give credit to photos that I use on my blogs and if I can to link it back to the original site where it came from.

As an educator I think that we are responsible for making students aware of how to be respectful online, even though there are a great number of people out there that don’t honor these rules of respect. Take for instance, the case of Allison Stoke (as mentioned in Fryer’s Understanding and respecting copyright: A problem for many) who’s photo got spread far and wide across the internet. This presses even further how important it is for education to include digital citizenship as a core part of curriculum in this day and age. We’re all living online as much as we are offline, and in the same way that we teach our students not to lie and steal, we should not take what’s not ours online as well. I mean, it’s pretty clear that we teach our students not to take someone’s property and claim it as their own, we also teach our kids not to plagarize written work. In the same way, we should be teaching them not to take digital creations without giving proper credit to the creator.  I think the biggest issue right now is probably awareness. Kids don’t equate their actions online as the same as their actions in the world, probably because they can hide behind a screen. It’s that mentality of “who’s going to know?”. Once again, this just emphasizes how important it is that we start teaching this as a large part of our curriculum.

It’s great that we can share so much online now, but this is all relatively new so it’s time to take action and teach kids not just about how to be safe online but also respectful digital citizens.

Updates on my Final Project

During my first week in course 2, my research online for resources to help teach digital citizenship in Kindergarten led me to an idea for my final project. To see the first draft of my UbD planner see my blog post: Learning to be Responsible…Even if you’re just five.

One of the people who has agreed to collaborate with me on this project is Jay Graham (@jasongraham99), and he has left some great comments on the planner that has helped me think further about the project. Here are a couple of the edits and add-ons that have happened because of his feedback. Thanks Jay!

This was a great reminder of how these skills are so transdisciplinary! I’ve added a little bullet because obviously we’re doing different things in different schools so how we teach these skills across curriculum areas will be different for each teacher.

I’ve decided to go with Padlet because it is easy to access through the iPads which will allow for the students to independently add to the document. I think that being able to add pictures and video will also open it up because my students are not quite comfortable typing on the iPad yet. Being able to record a video of a contribution would be much easier. Although, I’ve had trouble uploading video to Padlet before, so perhaps this will be a good opportunity for my students to practice typing using the iPad! 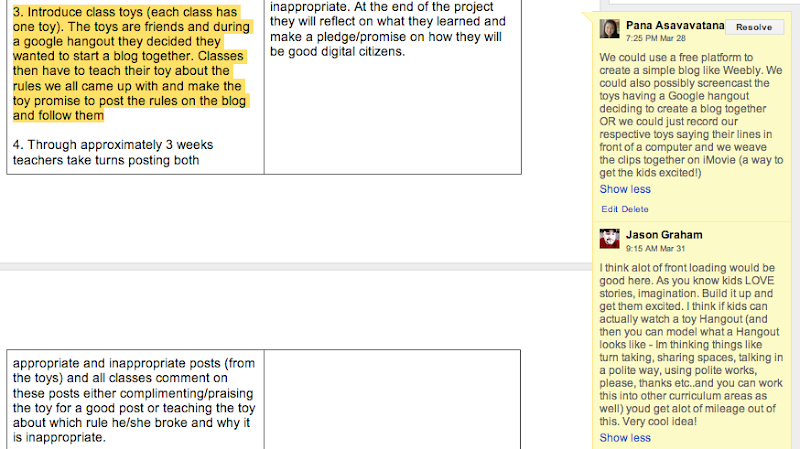 I thought Jay’s comment on using the video of the Toy’s hangout to reinforce how to show respect during a Hangout or Skype call was great! In my class we already have a set of rules we follow when we Skype with another class. Although some kids still have a hard time not being silly in front of the camera as seeing yourself on a screen can be quite entertaining for a little kid! I’m hoping to incorporate this into the script for the Hangout our toys will have as a part of teaching respect during a video call.

This was probably my favorite piece of feedback because I love how Jay reminded me of how to further open up the project to others through reflection. We’re aiming to share our learning and so should our students! So, now the planner has been edited to include sharing within the school and home as well as to a more international audience online.